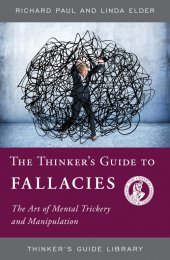 VIEW A SAMPLE OF ITEM
including: Table of Contents, overviews and selected pages.
Fallacies Preview

The Thinker's Guide to Fallacies: The Art of Mental Trickery and Manipulation

Richard Paul and Linda Elder
Order from Rowman & Littlefield here.
This volume of the Thinker’s Guide Library introduces the concept of fallacies and shows readers how to discern and see through forty-four different types. Focusing on how human self-deception, mental trickery, and manipulation lie behind fallacies, this guide builds reasoning skills and promotes fairminded, logical thought, discussions and debate.
As part of the Thinker’s Guide Library, this book advances the mission of the Foundation for Critical Thinking to promote fairminded critical societies through cultivating essential intellectual abilities and virtues across every field of study across world.
Rowman & Littlefield Publishers / The Foundation for Critical Thinking
Pages: 56 • Trim: 5 1/2 x 8
978-0-944583-27-2 • Paperback • January 2012 • $21.99 • (£14.95)
978-1-5381-3377-4 • eBook • June 2019 • $20.50 • (£13.95)
Series: Thinker's Guide Library


Additional Information About:
The Thinker's Guide to Fallacies: The Art of Mental Trickery and Manipulation

The study of fallacies can be pursued in at least two different ways. It can be approached traditionally: in which case one defines, explains, and exemplifies ways in which unsound arguments can be made to appear sound. Or it can be approached deeply, in which case one relates the construction of fallacies to the pursuit of human interests and irrational desires. Using the first approach, students gain little by memorizing the names and definitions of fallacies. They soon forget them. Their minds are left largely untouched and therefore unmoved. On the other hand, the second approach makes possible the acquisition of lifelong insights into how the mind – every mind – uses unsound arguments and intellectual “tricks” to further its ends.

Students need seminal insights and intellectual tools that enable them to protect themselves from becoming intellectual victims in a world of swarming media piranhas, or, just as bad, from joining the swarm as a junior piranha in training. Insights and tools, grounded in intellectual integrity, should be the ultimate aim of the study of “fallacies.”

The cultivation of intellectual virtues is crucial to human development. Without a long-term transformation of the mind, little can be done to produce deeply honest thought. When challenged, the human mind operates from its most primitive intellectual instincts. This can be verified in the history of politics, economics, religion, and war — indeed in any history that deeply plumbs the human mind in action.

Consequently, it is important to learn to recognize the most common tricks of persuasion, that we might better understand ourselves and others. Used on others, fallacies are intellectually indefensible tricks of persuasion and manipulation; used on ourselves, they are instruments of self-deception.

In this guide, we concentrate on the most common and flagrant intellectual tricks and snares. Sometimes these tricks are “counterfeits” of good thinking. For example, a false dilemma is the counterfeit of a true dilemma. We shall see this most obviously in dealing with errors of generalization and comparison.

44 Foul Ways to Win an Argument (which include the following):