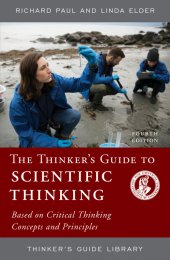 VIEW A SAMPLE OF ITEM
including: Table of Contents, overviews and selected pages.
Scientific Thinking Preview


This guide focuses on developing the intellectual skills inherent in the well-cultivated scientific thinker. It helps students and practicing scientists come to reason within the logic of science and to see the field as a cohesive whole.

From astronomers to zoologists and physicists to chemists, skilled scientists use careful analysis to question data, test theories, draw logical conclusions, and propose feasible solutions. Students in science courses, and scientists themselves will find their analytical abilities enhanced by the engaging framework of inquiry set forth by Richard Paul and Linda Elder in this guide.


Additional Information About:
The Thinker's Guide to Scientific Thinking - Based on Critical Thinking Concepts and Principles

A critical approach to learning science is concerned less with accumulating undigested facts and scientific definitions and procedures, than with learning to think scientifically. As we learn to think scientifically, we inevitably organize and internalize facts, learn terminology, and use scientific procedures. But we learn them deeply, because they are tied into ideas we have thought through, and hence do not have to “re-learn” later. A critical approach to learning science requires us to ponder questions, propose solutions, and think through possible experiments.

• comes to well-reasoned scientific conclusions and solutions, testing them against relevant criteria and standards;

• communicates effectively with others in proposing solutions to complex scientific problems.

Scientific thinking is, in short, self-directed, self-disciplined, self-monitored, and self-corrective. It presupposes assent to rigorous standards of excellence and mindful command of their use. It entails effective communication and problem solving abilities as well as a commitment to developing scientific skills, abilities, and dispositions.