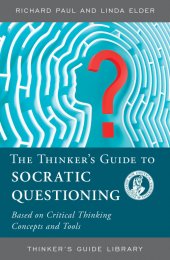 VIEW A SAMPLE OF ITEM
including: Table of Contents, overviews and selected pages.
Socratic Questioning Preview

The Thinker's Guide to Socratic Questioning


The Thinker’s Guide to the Art of Socratic Questioning introduces readers to powerful methods for questioning that pinpoint underlying beliefs and systems of logic. It brings together the principles of critical thinking with Socratic questioning.

Richard Paul and Linda Elder illuminate the practicality and accessibility of Socratic questioning for revealing and solving problems in thought. Teachers, students and professionals will find in this book essential questioning strategies for reasoning within any field of study or endeavor.


Additional Information About:
The Thinker's Guide to Socratic Questioning

Why a Thinker's Guide on the Art of Socratic Questioning?

The unexamined life is not worth living—Socrates

It is hard to imagine someone being a good critical thinker while lacking the disposition to question in a deep way. It is also hard to imagine someone acquiring the disposition to question in a fuller way than Socrates. It follows that those truly interested in critical thinking will also be interested in the art of deep questioning. And learning the Socratic art is a natural place to start.

Teachers, students, or indeed anyone interested in probing thinking at a deep level can and should construct Socratic questions and engage in Socratic dialogue. When we use Socratic questioning in teaching, our purpose may be to probe student thinking, to determine the extent of their knowledge on a given topic, issue or subject, to model Socratic questioning for them, or to help them analyze a concept or line of reasoning. In the final analysis, we want students to learn the discipline of Socratic questioning, so that they begin to use it in reasoning through complex issues, in understanding and assessing the thinking of others, and in following-out the implications of what they, and others think.