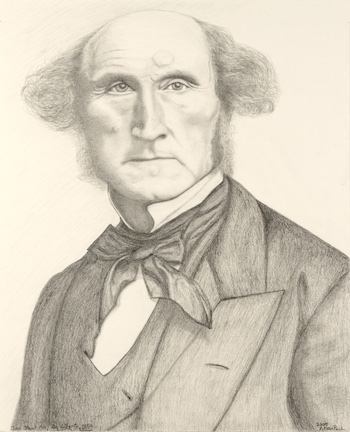 A pupil from whom nothing is ever demanded which he cannot do, never does all he can.

John Stuart Mill, born in London in 1806, was educated by his father, James Mill, a leading exponent of radicalism.  John Stuart Mill later became one of the most widely recognized authorities on utilitarianism.[1]  His most famous works include On Liberty, Representative Government, Utilitarianism, and The Subjection of Women.

Mill was educated exclusively by his father who required him to read widely, even at a very young age.  At the age of 8, he became schoolmaster to the other children in the family. He was taught Latin and Greek; at age 12, he began a thorough study of the scholastic logic, at the same time reading Aristotle, and a year later reading Adam Smith and Ricardo with his father.

The really important part of Mill’s education seems to have been the close association it involved with the strenuous character and vigorous intellect of his father.  From his earliest days he spent much time in his father’s study and habitually accompanied him on his walks in North London.  The accuracy of Mill’s impressions was tested by his subsequently drafting a “resume” of their conversations.  Mill thus learned to grapple with difficulties and accustom himself to the necessity of precision in argument and expression.  He acquired his father’s speculative opinions.  James Mill said, “One of the grand objects of education should be to generate a constant and anxious concern about evidence.”  The duty of collecting and weighing evidence for himself was at every turn impressed upon John Mill; he was taught to accept no opinion on authority.  He was educated as an “apostle of reasoned truth,” not an apostle of any dogmatic system.

In the mid 1850’s, Mill wrote his Autobiography, and in it we find, among other things, a remarkable story of a father (James Mill) dedicated to the intellectual development of his son, as is evidenced in the methods he used to instruct, guide, and direct John Stuart Mill to ever deeper levels of understanding, insight and knowledge. James Mill carefully crafted a one-on-one tutorial approach, with emphasis on the development of critical thinking abilities, traits and dispositions.  His fundamental purpose was to develop, in his son, a mind in control of itself, ever reaching for the truth. Of his father’s instructional methods, Mill said:

The path was a thorny one even to him, and I am sure it was so to me, notwithstanding the strong interest I took in the subject.  He was often, and much beyond reason, provoked by my failures in cases where success could not have been expected; but in the main his method was right, and it succeeded.  I do not believe that any scientific teaching ever was more thorough, or better fitted for training the faculties, than the mode in which logic and political economy were taught to me by my father.  Striving, even in an exaggerated degree, to call forth the activity of my faculties, by making me find out everything for myself, he gave his explanations not before, but after, I had felt the full force of the difficulties; and not only gave me an accurate knowledge of these two great subjects, as far as they were then understood, but made me a thinker in both.  I thought for myself, almost from the first, and occasionally thought differently from him, though for a long time only on minor points, and making his opinion the ultimate standard (p. 43).

John Stuart Mill emerged as a leading Utilitarian in the 19th century. Fearing mass conformity - what he saw as sheep-like uniformity which imposed narrow parochial views and arbitrary rules on those more enlightened - Mill was concerned to illuminate these problems, in advancing more just societies. On Mill’s view, a critical society would necessarily entail freedom of thought and the granting of fundamental individual rights. In speaking of human freedom, in his classic essay entitled On Liberty, Mill says:

[The appropriate region of human liberty] comprises, first, the inward domain of consciousness; demanding liberty of conscience in the most comprehensive sense; liberty of thought and feeling; absolute freedom of opinion and sentiment on all subjects, practical or speculative, scientific, moral, or theological. The liberty of expressing and publishing opinions…is practically inseparable from it. Second, the principle requires liberty of tastes and pursuits; of framing the plan of our life to suit our own character; of doing as we like, subject to such consequences as may follow; without impediment from our fellow-creatures, so long as what we do does not harm them, even though they should think our conduct foolish, perverse, or wrong…No society in which these liberties are not, on the whole respected, is free, whatever may be its form of government; and none is completely free in which they do not exist absolute and unqualified. The only freedom which deserves the name, is that of pursuing our own good in our own way, so long as we do not attempt to deprive others of theirs, or impede their efforts to obtain it (p. 50).

Mill finely detailed the problem of the masses silencing the voices of the few, and reminds us of the importance of upholding individual freedoms, if we are to cultivate civilized societies:

If all mankind minus one were of one opinion, and only one person were of the contrary opinion, mankind would be no more justified in silencing that one person, than he, if he had the power, would be justified in silencing mankind…the peculiar evil of silencing the expression of an opinion is, that it is robbing the human race; posterity as well as the existing generation; those who dissent from the opinion, still more than those who hold it. If the opinion is right, they are deprived of the opportunity of exchanging error for truth; if wrong, they lose, what is almost as great a benefit, the clearer perception and livelier impression of truth, produced by its collision with error (p. 53).

We can never be sure that the opinion we are endeavoring to stifle is a false opinion; and if we were sure, stifling it would be an evil still. First: the opinion which it is attempted to suppress by authority may possibly be true. Those who desire to suppress it, of course, deny its truth; but they are not infallible. They have no authority to decide the question for all mankind, and exclude every other person from the means of judging. To refuse a hearing to an opinion, because they are sure it is false, is assuming that their certainty is the same thing as absolute certainty. All silencing of discussion is an assumption of infallibility…on any matter not self-evident, there are ninety-nine persons incapable of judging of it for one who is capable; and the capacity of the hundredth person is only comparative; for the majority of the eminent men of every past generation held many opinions now known to be erroneous, and did or approved numerous things which no one will now justify.  (p. 54-56).

As an exemplar of intellectual courage, intellectual humility, and confidence in reason, we honor, posthumously, the life and work of John Stuart Mill through the Bertrand Russell Distinguished Scholar Series.

[1] The utilitarian philosophy is grounded in the principle that right actions are to be measured in proportion to the greatest good they achieve for the greatest number.